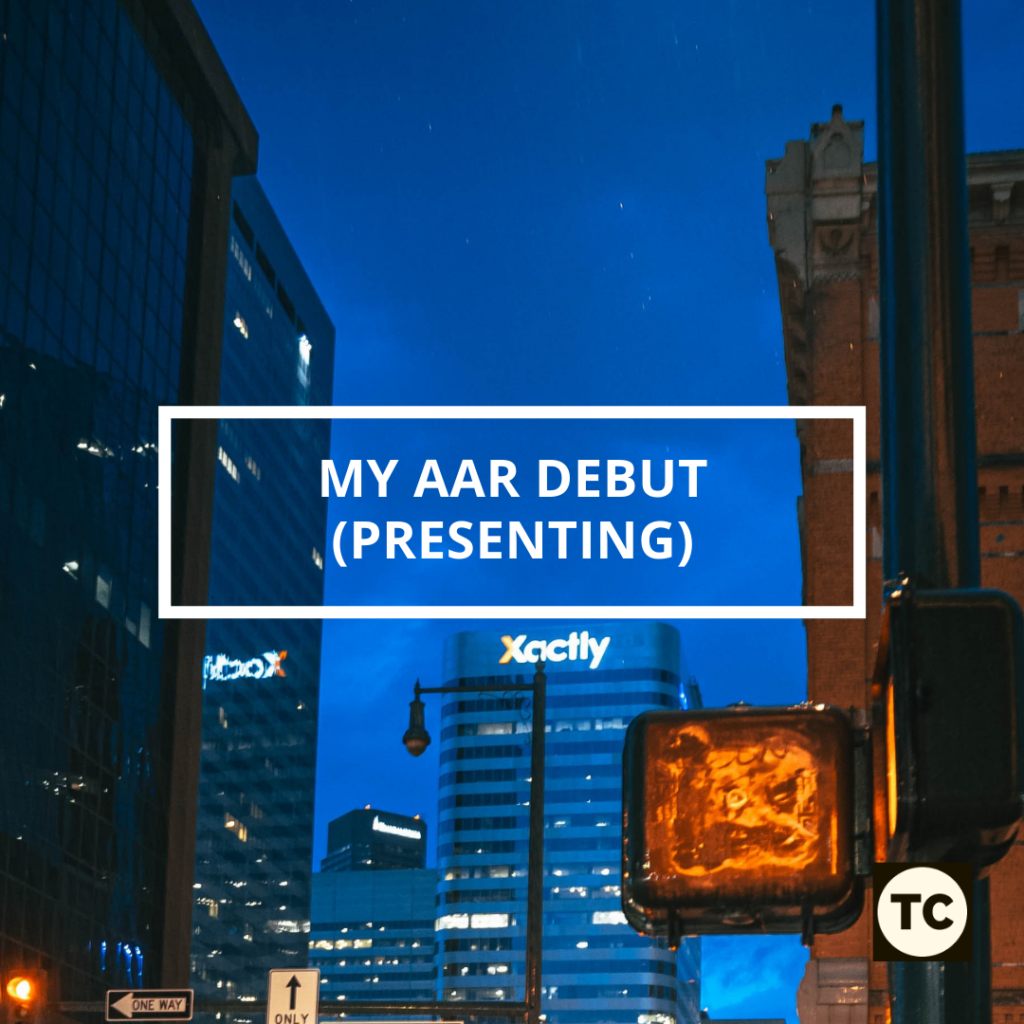 I’ve been aware of AAR, and a member sporadically, since 2014 when I was doing my MA. The AAR is the American Academy of Religion – the largest scholarly society for the study of religion in the English language – and along with SBL (The Society of Biblical Literature) hosts a ginormous (10,000 people in a good year) conference in an American city in November of each year. I first went with work back in 2017 – to Boston – and returned in 2021 for the meeting in San Antonio. Whilst my main interest is from a publishing perspective, it’s also a privilege to be able to be in a space that makes sense for one of my longer term personal goals – doing further study/research, and engaging in scholarly conversations. So this year, on a bit of a whim, I prepared a couple of paper proposals (one had already been rejected from one conference, and was rejected from this one too, so probably not one to do much more work on!) and had one accepted, and I gave a shorter version of it in Norway recently.

The longer abstract is pretty much identical to that for my ESSSAT Paper, so here’s the 150 words that should appear in the program book:

The Scandal of the evangelical environmentalist? Climate crisis and Christian Discipleship

A reasonable cultural perspective on evangelicalism would not align it with environmental concerns. Particularly in its’ noisier, white and North American manifestations, the complex and growing phenomena of evangelicalism(s) has a reputation for a focus on the eternal salvation of human souls; to the detriment of reasonable concern for the present world. This paper suggests that there is a scandal of evangelical environmentalism, rooted not in an anti-science phenomenology, but rather in a failure to take the bible as seriously as the movement claims to.

This paper will draw on the recent history of evangelicalism to attempt to show that whilst popular perception and lay reality may indeed point to a scandal of the lack of an evangelical environmentalism, the resources exist within and from that tradition to address it.

I’m intending to use the feedback from presenting at ESSSAT in Norway to refine some of the engagement with science and the cultural aspects, and then add a significant reflection on Christian discipleship, attempting to make some sense for the church of the broader argument. I’ll be presenting as an evangelical insider – and if I’m not invited back, that’s fine – so I want to make sure that what i’m producing is actually useful. I’d hope to publish the longer version of this paper in a journal that would resonate with pastors and church leaders. So if you’ve come across anything linking the climate crisis and Christian discipleship, particularly from an evangelical stable, do feel free to stick it in the comments.