**MASSIVE DISCLAIMER – I work in Digital Marketing for IVP, and recommended this book as a key resource for my talk at the Premier Digital Conference in November 2016. This review should thus be taken with a pinch of salt** 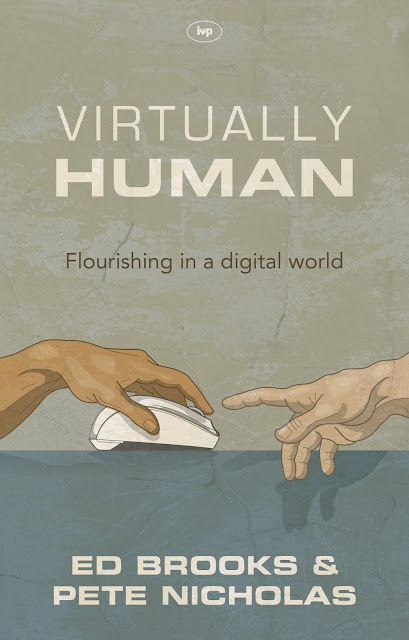 The authors of this excellent little book have touched a nerve with both title and content. By focusing on the key question that the digital revolution raises (Which is, of course, ‘what does it mean to be human?’) Ed Brooks and Pete Nicholas have their fingers right on the pulse of the conversation around being human and doing that in the digital world. Ed and Pete are well-placed to write this book – Ed being a PhD student having done ministry amongst students in Cape Town and Oxford, and Pete being a church planter in London having previously worked in the tech industry.

This review is going to be less systematic than previous reviews – not least as this book touches on so many things that I’ve written about before, and the sum total is a book that I’d encourage everyone to read. There is no qualification in that recommendation – I think people with a Christian faith or no faith should read it, I think leaders and followers should read it. The sheer scale of the revolution to human identity and understanding, let alone culture and religion, posed by the realization of the foundational values of the internet represented and ’embodied’ in social media means that this book should get the widest possible readership.

Ostensibly, this is a book about technology (in particular social media and the internet) and the approach that the authors take to new things is cautiously optimistic. Rooting their observations and interactions in a classic biblical view of culture and creation, the authors are clearly well read in the relevant subject areas. There are allusions to cutting edge texts of digital culture, pertinent news stories, and ancient theological treatises on new things. This is a thought-through book, carefully written and researched, that pays reading carefully. Ultimately, though, this isn’t really a book about technology.

Fundamentally, this is a book about what it means to be human. As the subtitle suggests, it particularly focuses on ‘flourishing in a digital world’, but this book has deeper suggestions than that. Ed and Pete expertly tease out the questions raised for human being and Christian living by social media. They expose and examine the values the internet was built on – even as they analyse as users and fans the technologies and networks that many of us live our lives using. As someone who works in Digital Marketing, this was an immensely helpful book that confirmed some of the reservations I have around the tools I use on a daily basis, as well as underline the importance of living well for Jesus in the digital world.

This is a deeply contemporary book. I predict that it will seem very out of date in about 5 years, perhaps less. Hopefully the authors are already working on a new edition! I say this not as a criticism but as an observation – the authors themselves are very aware of the fast pace of technology and the changing nature of the innovations we take for granted. But some of the challenges and stories they examine are timeless. The chapter on sex and pornography is superb – taking seriously the common assumption that humans are relational, and rightly observing that humans are also embodied. This is an integrated book – rather than trying to push away the digital world or biblical truth, it seeks to be Reformed in the best possible sense, applying the timeless truths of God’s Word to the ever changing and constantly evolving creativity of God’s World.

You can probably tell that I am a fan of this book. As I said in my disclaimer at the top, I’ve recommended it to be stocked at a conference I’m speaking at this November. This is an important book for such a time as this. Read well, it could go a long way towards helping churches embrace technology in a Godly, missional way, as well as encourage my generation and those even younger than me to think carefully about how we live, nay, flourish, in a digital world. This is a profoundly Christ-centred book that points beyond our present time to the ultimate author, the ultimate innovator. The chapter on time itself is superb – because the authors know and love deeply Jesus Christ the Lord of Time. Again, I digress. I repeat my universal recommendation, and eagerly await the next chapter…