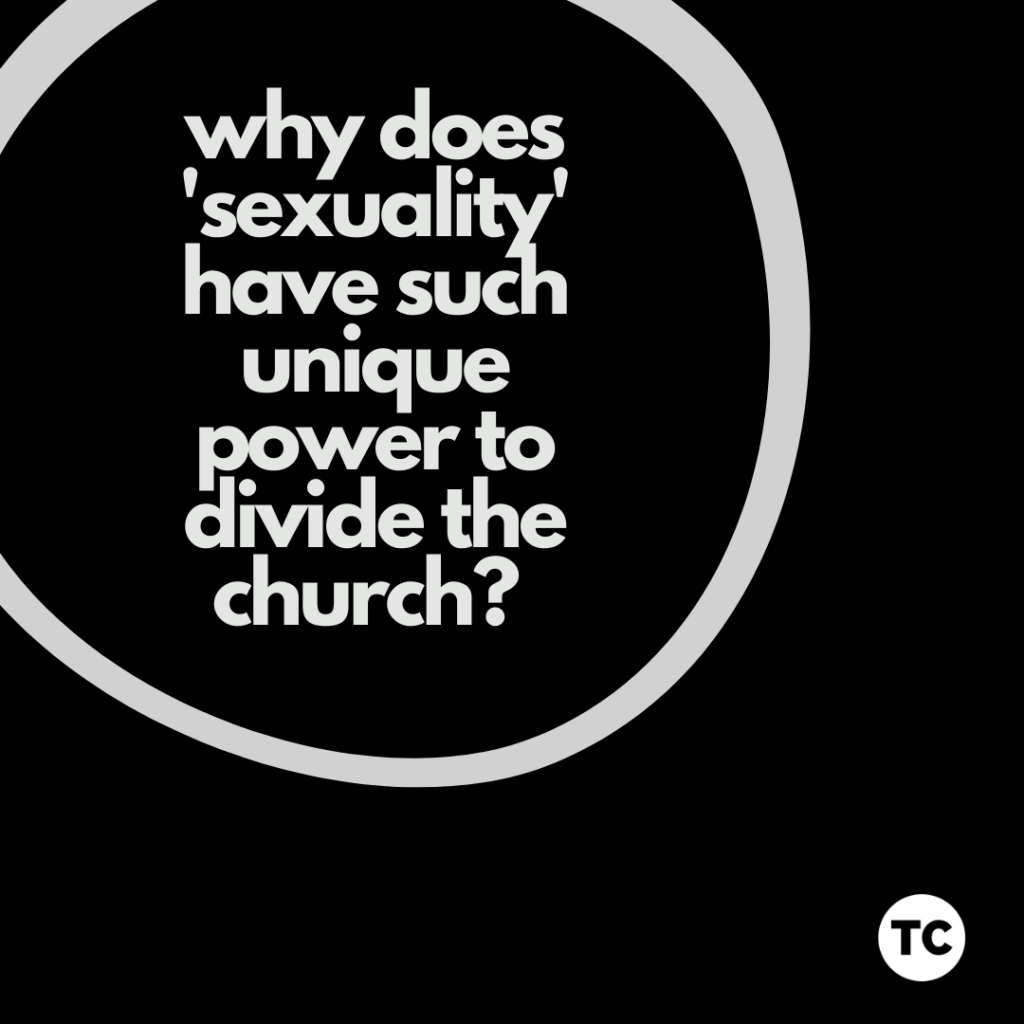 It’s not a great time, it seems to me, for those outside the church looking at the church in England and wondering what we are about, let alone what we are for. 2500+ leaders in churches signed a letter asking the government to be careful in ‘banning conversion therapy’ (which is already illegal – resulting in a particularly unedifying stream of tweets, new twitter accounts, and an open letter [I’m not linking to any of it here]. As it doesn’t say in the Bible, ‘they shall know you are Christians by the way you demonise and divide amongst each other in public’. A little closer to home (I didn’t get round to signing that open letter, but that’s another story) I was saddened to see that a church left Vineyard movement here in the UK. choosing a rejection of the historic, orthodox position on human sexuality in favour of a jumbled and likely contradictory mish-mash of ideas [Again, I’m not linking to the specific thing, in order to keep this post ‘on tract’]. The latter feels a bit like deja-vu, for anyone even vaguely familiar with how the Vineyard in the USA handled the topic, but time will tell.

There are lots of things I wanted to write – and some things I might still write – about those two little vignettes above. But as I pondered, another thought occurred.

In fact, it’s a question.

Why does ‘sexuality’ have such a unique power to divide the church?

I’m using ‘sexuality’ to cover a huge range of things – the presenting issue is arguably the acceptance or otherwise of same-sex sexual relationships as being equal to marriage, but it would also include divorce and remarriage, gender identity and trans* questions, and other things that touch upon what it means to be human and in particular what it means to be sexual. I’ve written before about what I think the Bible fairly clearly and consistently teaches about sex, based on some talks I did with my wife at our local church back in 2018. You can read them here.

If you agree with me, or if the above posts have piqued your interest, great, but what I write below stands alone, if hopefully integrated.

1. ‘Sexuality’ is close to our humanity but it’s not fundamental to it.

Humans were humans before we were sexual. Sexuality is incredibly important but it doesn’t define who we are. It’s a comparatively recent trend to see oneself as primarily defined by our sexuality – and so whilst it is important, it isn’t the be all and end all. When we get things out of kilter, we lose sight of the main thing, and start going down strange tangents.

2. ‘Sexuality’ is core to the story and the devil loves a diversion

It’s been said that the universe has a binary bent and that the ultimate story is a love story. Christians have historically pointed to the way God brought together Adam and Eve, and the way God brings together Christ and His Church, as being vital to understanding the way the Bible fits together and the way the world is built. Ever since the beginning, the devil has been asking ‘did God really say?’. In fact, that was one of very few points of agreement with Ken Wilson, a revisionist former Vineyard pastor who’s book really got me involved in talking and writing about this stuff. That, however, is a story for another day.

We can’t live without stories. We can live without having ‘sex’, defining ourselves in certain ways, and misunderstanding each other. The story of sexuality is one that is often misunderstood, because it points to a better story.

3. The classic Christian position was never meant to be popular

There’s a particularly chronologically snobbish view on history that sees the last 60 or so years as a shining beacon of progress from the Christian-inspired repression of free love and sexual expression. We can debate the extent to which culture shaped the church or the church shapes culture in different periods of history till the cows come home, but I’d rather understand the intent of our creator and how that means we should try to live until the full coming of the new creation.

What’s really interesting is that the unpopular Christian view on sex is about as suspicious (in the West at least) now as it was when the church first emerged:

“as Christianity emerged with a distinctive religious identity, the surrounding pagan culture began to take notice. And it didn’t like what it saw. Christians were seen as strange and superstitious—a peculiar religious movement that undermined the norms of decent society. Christians were, well, different… While it was not unusual for Roman citizens to have multiple sexual partners, homosexual encounters, and engagement with temple prostitutes, Christians stood out precisely because they refused to engage in these practices.”

So writes Mike Kruger, in a historical analysis which challenges me that perhaps being different is close to the heart of discipleship.

4. Jesus tells us to be on our guard

Some of the ‘Jesuses’ that we see today are very attractive, but don’t bear much relationship to the Jesus of history who we read about in the Bible. That Jesus tells us to gouge our eyes out in order to avoid sexual sin (Matt 5:28-29, even if we aren’t taking it literally, it’s pretty unambiguously negative!), instructs us to stand our ground and be on our guard (Luke 21:34-36), and has really harsh words for those who cause Jesus’ followers to stumble (Matt 18:6-9, interestingly there’s a link to the gouging eyes out thing there). I wonder if perhaps the cultural capital that many churches have historically had has caused us to drop our guard, and let bad ideas into the church. It’s certainly dulled our weapons to combat false teaching.

This is particularly relevant to the ever-prevalent notion that suggests that Jesus never addressed, for example, same-sex sexual relationships, and so we don’t have anything to say about them. Let’s look next at why this is important.

It’s nice to be tolerant. Isn’t it? It seems like a good word. Surely it wouldn’t hurt to have that unmarried couple lead a house group – they are so nice, and have a good lounge. And we can overlook Tim’s drinking – he’s a fantastic teacher, and surely that’s important. Or what about Stacey? Sure, we know she spends saturday nights with a different person most weeks but she prays so earnestly on a sunday morning.

Sound judgemental? Good. Because I think there’s something there that echoes something that Jesus says. Consider these words in Revelation 2:18-25, in the mouth of Jesus to a church who are doing some things right:

“To the angel of the church in Thyatira write:

These are the words of the Son of God, whose eyes are like blazing fire and whose feet are like burnished bronze. I know your deeds, your love and faith, your service and perseverance, and that you are now doing more than you did at first.

Nevertheless, I have this against you: You tolerate that woman Jezebel, who calls herself a prophet. By her teaching she misleads my servants into sexual immorality and the eating of food sacrificed to idols. I have given her time to repent of her immorality, but she is unwilling. So I will cast her on a bed of suffering, and I will make those who commit adultery with her suffer intensely, unless they repent of her ways. I will strike her children dead. Then all the churches will know that I am he who searches hearts and minds, and I will repay each of you according to your deeds.

Now I say to the rest of you in Thyatira, to you who do not hold to her teaching and have not learned Satan’s so-called deep secrets, ‘I will not impose any other burden on you, except to hold on to what you have until I come.’“

Sexual immorality here is the greek word porneia – which covers, quite literally, a multitude of sins, from adultery and fornication to same-sex sexual relationships. Jesus explicitly condemns a so-called ‘prophet’ whose teaching leads people astray. The result of this judgement is a division – some will go on to be with Jesus, others, this false-teacher’s followers, will die. It’s stark. And it’s the ultimate answer to the question I’ve been pondering, I think.

Why does ‘sexuality’ have such a unique power to divide the church?

It goes to almost but not quite the heart of who we are – and we live in a culture where many think it is the heart of who we are. A right understanding of it is closely intertwined with the true story of reality – and so the devil loves to distract and distort. The church’s view of sexuality is not meant to be in kilter with society – Jesus calls us to a different way. Jesus tell us to be on our guard – and explicitly teaches that this stuff is important, and has serious consequences.

Discussion of sexuality has a unique power to divide the church. It has before, it will in the future, and it is in a myriad of different ways even now.

The opposite of division is unity. The route to unity, as Jesus prayed, is sanctification. I’ll close with some words of Jesus, in his prayer in John 17:15-19. See if you can see a resonance with what I’ve written. And pray the prayer of Jesus with Jesus!

“My prayer is not that you take them out of the world but that you protect them from the evil one. They are not of the world, even as I am not of it. Sanctify them by the truth; your word is truth. As you sent me into the world, I have sent them into the world. For them I sanctify myself, that they too may be truly sanctified.“