This post was originally published on the 28th of December, 2012.

The last few weeks have featured some high profile interventions, announcements, and statements from relatively influential people, about fairly major topics. We’ve seen Dawkins go off on one again about religion, the Queen steal the job of televangelist, a high court judge make some fairly poorly recieved remarks about gay marriage, and the usual fare of a Catholic Bishop do the same. If we cast our eyes further back to the Women Bishops debate (Which I blogged on here, and here) then we can see people intervening again. I think particularly of the rather infuriating debates in Parliament, a wonderful excercise in either missing the point or the first hints of secular tyranny. But enough Daily Mail-esque hyperbole.

Richard Dawkins may turn out to be one of the most helpful figures for the cause of Christ in recent history. Whilst he doesn’t have the faith or evangelistic prowess of a Billy Graham (at least, not in Christ, as his fervour for all things ‘A‘ is well known), he has a brilliant habit of shouting very loudly and rudely, and drawing the attention to the fact that the majority of functioning Christians are not dim, dangerous, deluded denizens of his fantasy, but in fact relatively normal people. Not totally normal – we believe some pretty radical things (Sin, Grace, Creation [in various ways, themes, and Doctrines], Hope, Resurrection) – but not dangerously deluded either. This year, as a kind of wierd Christmas present to the reading world, he has essentially gone one better, over-reached himself, and recieved public scorn from members of his own camp. This (unfortunately Daily Mail) article observes that Peter Higgs, the man behind the Higgs-Boson, would call Dawkins a ‘fundamentalist’, which is unfortunate for him. Higgs nails it when he says “you have to be rather more careful about the whole debate between science and religion than some people have been in the past“. If you’ll permit me, amen. Dawkins is meddling with things he doesn’t fully understand (Theology, Philosophy), and over-reaching himself. The truth of the matter, the place where real debate can happen, is in the Peter Higgs realm, where we all stop shouting and think.

One of my favourite tweets over the festive period came courtesy of UCCF Staffworker, blogger and tweeter extraordinaire (did I mention he’s also curated a few books, like the excellent “Sunshine of the Gospel”?), who came up with this gem; 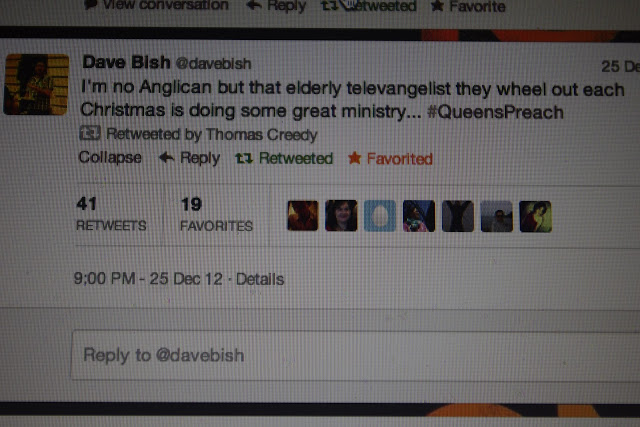 Once again (like last year!) the Queen took the opportunity in her Christmas message to the nation to share something the real reason behind the over-shopping, over-drinking, over-eating and over-sleeping of the festive season. She thanked the people of the UK for their affection for her (As demonstrated in the frankly amazing Jubilee season [sorry to any reading this who aren’t massive monarchy fans]), gave a big nod to the fun of the Olympics, and reminded us of much of the core of the Gospel. This, in contrast to Dawkins’ festive message, was a welcome intervention, and a reminder that cultural Anglicanism (by nature of the Church being an established one) can be a good thing. A bit like when I wrote ‘Cheers Rowan!‘ about his Jubilee sermon for the Queen.

The third mentioned ‘intervention’ is that of Sir Paul Coleridge, a High Court Judge, in regards to the Governments proposals to legislate for ‘gay marriage’. Coleridge has been criticised for his comments – but they come from a place of understanding the legislation, and from having dealt with case law on this sort of issue over a long career. To me, it seems entirely legitimate that someone who spends their day dealing with the fallout of this sort of thing, should speak up regarding their opinions on proposed changes to marriage law. His comments, as reported by the BBC, were fairly mild and entirely reasonable, whilst Archbishop Vincent Nichols managed to again get a bit hot under the dog collar – I agree with his points, but feel that (like using CAPITALS ON THE INTERNET, HERES LOOKING AT YOU Christian Institute) his tone was wrong. Coleridge intervened well.

Three festive interventions. Three different characters. Three allegedly different issues. Interesting stuff. But to me, its all linked. All of it. Science informs one’s worldview, as can religion. Worldview informs actions, tone, and speech. Policy is influenced by humans, who are influenced by anything. Its quite messy. But to me, thats at the very heart of the Christmas story. The messiness. And the intervention. Its why Jesus came. He came for the scientists – because he is the supreme creator and sustainer, the God who was “in the beginning“. He came for Queens and Kings, because he is the King of Kings, of whom all earthly rulers are but mere shadows. He came for the Judges and the Priests, because he is the one from whom all justice and holiness can be reckoned. He came for the individuals, and the minorities, the evangelicals and the rest. The sinners and the saints. Its been said before.

But it bears repeating.

Jesus came as the ultimate intervention to deal with the brokenness, disunity, inequality and fear of the human condition. Like light into dark. As the truth of John 1:1-5 reminds us

He was in the beginning with God.

All things were made through him, and without him was not anything made that was made.

In him was life, and the life was the light of me.

Jesus is the Word of God. The light come into this present darkness to show us the way out, the way back to God. The story we remember at Christmas, but is always just behind the scenes, just waiting to be heard. Of how God intervenes.