I’ve been looking forward to writing this review for a number of months, having read this book avidly a couple of times, and seen the insights of the author as being helpful first-hand. The author, Rob McAlpine is a long-term follower of Jesus, based in Vancouver, Canada, who has been around the Charismatic movement in a variety of forms and ‘seasons’! This book is a product of a long walk in pursuit of God’s Kingdom, and instructive for younger charismatic Christians like myself. Rob has kindly written a guest post for me on ‘The Serpent Seed’, which informs some of what he engages with. 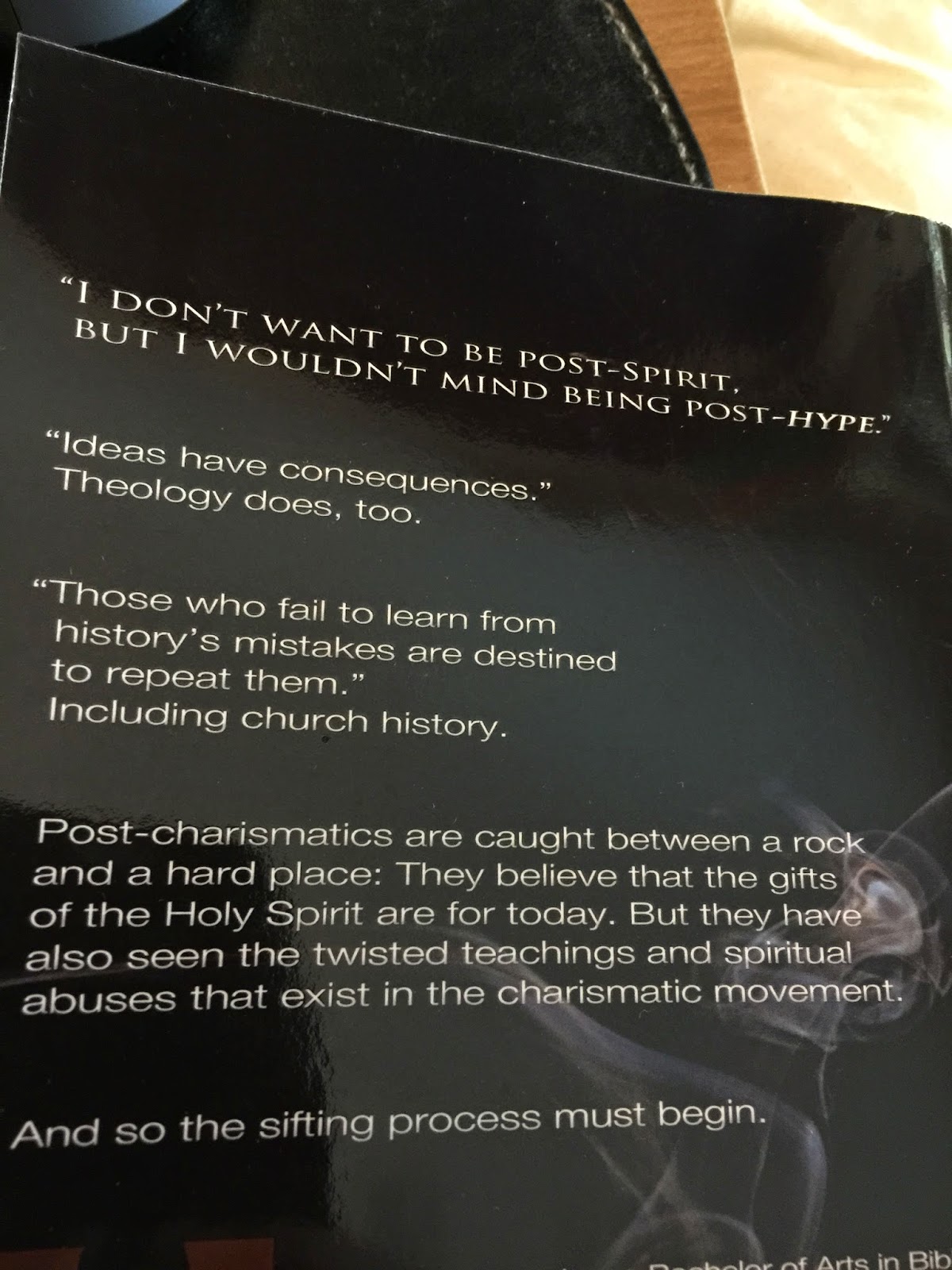 The back of the paperback edition of Post-Charismatic 2.0: Rekindling the Smouldering Wick is a good guide to what to expect, but also drastically undersells the book, in my opinion. In six chapters, Rob covers some important stuff, and he actually writes well. A common criticism of Christian books – and one of the reasons some of my best friends get bored of reading them – is that they are poorly written, or lack an engaging and sustainednarrative. What Rob manages to do beautifully here is weave a little of his own story, a framing narrative of a fictional conversation, and snippets of history and theology into a book that is both critical and kind, cautious without being polemic, and firm when Grace demands.

This book, partly due to the way it is written, and partly because of the pneumatological dynamite (pneumatology being that which pertains to the work and theology Christians ascribe to the Holy Spirit) is one that is hard to classify. A few pages in, Rob’s fictional characters describe a list, one that “is only funny if it hasn’t happened to you“. It should give you a sense of some of the issues Rob covers – and if you think that humour here is inappropriate or disrespectful, then this is a book you need to read. This book is for those who are no longer Charismatic, for those who have been following Jesus for a long time, for those like me who are convinced or intrigued by Charismatic theology but often/occasionally/regularly appalled by ‘charismatic practice’, and for those wondering whether there is anything to this malarkey of talking about the Holy Spirit. You’ll need to read the book to read the list.

Rob’s first chapter builds on that – emphasising the importance and biblical basis of Charismatic theology, but not afraid to observe the failings of men and women to follow Jesus and the leading of the Holy Spirit. This is not a book that gives much space for cessationism – the belief that the supernatural gifts of the Holy Spirit have ceased (thinks like healing, prophecy, etc) – but it is one that holds the Word of God, the Bible, as being far more valuable than spiritual-sounding but human-made ‘teaching’. The second chapter, part of what makes this book so valuable, is a brief history of the charismatic and Pentecostal movements. Rob gets it absolutely right when he says that “Context is everything… Before we can dig into some of the problematic areas currently affecting the charismatic movement, we need to understand their context” (p. 25). Rob is careful to note the global nature of the charismatic movement – from Wesley to Asuza Street and variously elsewhere, rather than focusing solely on one stream. This chapter is also a fascinating study in why different denominations/movements emerge, and what is important for Christian orthodoxy.

Stage set, with the personal touch of ‘Charismatics Anonymous'[!] in chapter 1, and the historical overview of chapter 2, Rob starts to dig a little deeper. This is where it can get uncomfortable – in the way that a surgeon must slice in order to heal – for those of us with charismatic/Pentecostal theology, but, as the back cover notes;

“Those who fail to learn from history’s mistakes are destined to repeat them.

The third chapter of Post Charismatic 2.0 deals with the controversial and oft-ignored Latter Rain movement. Never heard of it? Me too. Rob uncomfortably but vitally shows some of the errors that movement made, and the way that some of the teachings and ideas have lasted, with phrases like “God offends the mind to reveal the heart” (p. 55) and “The Joshua and Caleb Generation (they will possess the land that the previous generation failed to” (p. 56) having echoes and resonance in some well known speakers and teachers, perhaps especially (in my understanding) those associated with the ‘New Apostolic Reformation’ (more on this in a future post). I’m grateful for Rob taking the time to address the problematic doctrine of ‘Serpent Seed’ in a guest post on this blog. Rob is careful to note the nature of false teaching here – often accidental, often assumed by later generations, and close enough to the real thing that it looks genuine. Readers will be interested to note that among those movements listed here are quite well-known churches like Bethel, International House of Prayer, as well as more historic groupings like the Kansas City Prophets (who influenced but subsequently left the Vineyard movement of which I am a part).

The fourth chapter is where some of the people I love and respect in the charismatic parts of the most would be squirming – and I know exactly why. It is here that Rob deals – graciously and biblically – with the slippery topic Word of Faith. It is well noted that “some… have used the “health and wealth” or “positive confession” teachings as a warning against the entire charismatic movement. They mistakenly believed that this doctrine – properly known as “Word of Faith” – was normative for the mainstream of the charismatic movement” (p. 128). Again, not wishing to throw stones for no reason, Rob carefully traces the history of the Word of Faith movement, focusing particularly on a faulty interpretation of two Greek words, rhema and logos. My good friend, Vineyard Pastor Luke Geraty has made some good observations on that here. Rob carefully navigates, too, some of the complexities of biblical doctrines of healing and justice, in a way that is constructive and helpful. That wise old Wimber saying, “Faith is spelt risk” is put in its proper context, As Rob notes, “It is the understanding of the Kingdom of God as ‘already and not yet’ that guards us from over-promising, but at the same time, allows us to live with an expectation of Divine accompaniment as we take Spirit-led faith-risks” (p. 172-3). I couldn’t agree more.

It is the fifth chapter, however, which can be particularly challenging to those of us who are part of churches, charismatic or otherwise. It is sadly not rare to hear of abuse (whether sexual, spiritual, financial or other) by church leaders and other Christian leaders, and I believe that Jesus calls us to face up to these allegations, crimes and issues, rather than dodge them. Rob’s explosive fifth chapter, on Covering and Authority, is vitally important reading. He notes at the outset that the roots of the problems, seen in The Shepherding Movement decades ago, and manifesting itself as a ‘Culture of Hono[u]r’ in the present day, are not a new problem. Rather, “The problem of authoritarian leadership has been around for centuries. The prophets in the Old Testament regularly prophesied against the abuse that the Israelites were enduring under corrupt priests, false prophets and ungodly tyrants…” (p. 181). If you’ve been around folk and leaders who use phrases like “delegated authority”, or especially emphasise “the five-fold ministries”, then this chapter is worth reading carefully. The Shepherding Movement, as Rob notes, is a historical thing, occurring largely in the 1970’s, but its key ideas are perpetuated particularly in the aforementioned ‘New Apostolic Reformation’, particularly through the book Culture of Honor: Sustaining a Supernatural Environment, authored by Danny Silk of Bethel Church, Redding. Rather than take potshots, though, Rob is quick to look at what the Bible actually says about authority, accountability, and leadership, with a beautiful and challenging focus on how Jesus approached these topics. As he closes the chapter, Rob is right in noting that

Rob closes his book with a narrative chapter, After the Meeting (of that fictional group, ‘Charismatics Anonymous’), tying together the threads and sifting that he has been careful to nurture throughout the book. As Rob says, “Creating a healthy environment for practicing spiritual gifts won’t happen automatically. We first need to have a good understanding of what ‘healthy environment’ even looks like!” (p. 253). The authors careful subsequent examination of 1 Corinthians 12 is helpful. The call to discernment is well placed, and passionately made.

As you can probably tell, I am a big fan of this book. I recommend it in my list of great reading material if, like me, you yearn after ‘Charismatic Clarity’. I’d love to lend it to you, if you know me. Rob carefully exposes some of the errors found in parts of the charismatic church, but rather than just blowing things apart, carefully offers passionate, reasonable, Spirit-filled and biblical alternatives. This book is challenging – particularly if you have grown up or been immersed in certain kinds of churches – but well worth your time. I would love for all of my friends in the Vineyard, in Newfrontiers, New Wine, the HTB network and other charismatic churches to chew over this book. Rob probably isn’t 100% right all the time – I’d vote for about 98.5% – but this is a truly helpful, insightful, and valuable book for those of us who dare to believe, and live, that God moves today by the power of the Holy Spirit with and amongst his people, extending his Kingdom for his purposes, that the name of Jesus might be glorified….